I’d urge everyone to enjoy each period of life. Try not to get too consumed with what’s ahead and what’s behind.

I don’t mind being this age, but I’d like the fitness and energy I had when I was 25. I’m 62 years of age, but I have to think about it to be sure.

I am a family therapist and counsellor, and I also work with people who have drug and alcohol dependence. Both privately and in a psychiatric hospital. The most important thing in working with people is your personal connection to them. People want to feel respected and appreciated. The addicts I work with love my name, because it’s slang for marijuana.

My dad was short tempered, and he’d get himself in a state about something, like the toaster not popping up. I was about eight, and I remember thinking, oh, he can’t even control himself, he’s never going to be able to control me.

In my early twenties I was a nun for four years, and I was lucky enough to go to Palm Island. I went there with the idea that I would be helping the people who lived there, but actually I don’t think I helped them in any way. I certainly learned a great deal from them. I love the sense of humour of Indigenous women. I’m a registered nurse, and I was supposed to be nursing. I got on better with the Indigenous community than the white community. I went camping with the women. I was usually the only white person. The kids were free, and they used to follow me around. I must have told one of the men I liked motorbikes, and then a couple of the guys fixed up an old motorbike for me and I rode around the island every day. It was an important experience for me.

I originally entered the convent at Point Piper. There were only six women entering at that time. I am still friends with one of those women. It was a missionary order and you had to go where they tell you. I went to Melbourne for twelve months for the novitiate, and then I went to Brisbane and worked with children with a disability, which was great.

I loved being on Palm Island, but eventually I decided to leave the convent. I was naïve then, and I found a lot of things hypocritical. The nuns wouldn’t use the same crockery as the Indigenous people. They kept themselves quite separate. So I was the odd one out. And I was so virtuous myself, at that age, as you are. So I left.

I still have faith, and I put that I am Catholic on forms. I believe that there is one higher power, and there are lots of pathways through life. I don’t understand why Christian churches are so judgmental.

Every parent’s worst nightmare is for their child to have a significant accident, to be nearly killed.

That happened to my son when he was just eleven years old. We were standing together on a street corner, myself and three of my children, when a motorbike just ploughed into him. He was about as injured as he could be without being dead. I was resuscitating him. People were screaming. Ringing the ambulance. It was traumatic for the other two children, who weren’t hurt at all. I’m really glad that I followed the ambulance to the hospital, and insisted on staying with him, despite being told I couldn’t. That helped me, because they did a great job, and it was really important to me to know that my son had the best treatment possible in the circumstances. 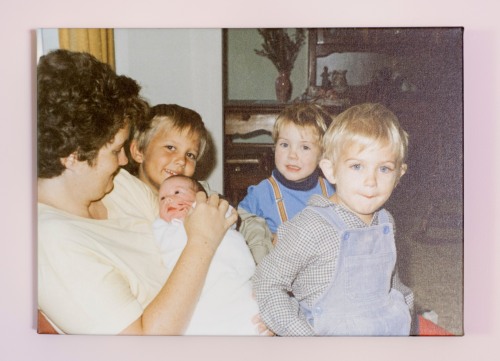 Recovery from global brain damage is slow. It took him ten years to fully recover. They wanted to put him in a modified school, but I refused that, and the brain injury team said that if I didn’t accept their advice, they wouldn’t help me any more. So I said suit yourself, I don’t care. I eventually got him into Northmead High, where the staff were extraordinary, and helped him well above the call of duty. My son was very unsteady on his feet. The deputy at the school appointed the two biggest bullies in the school to be his minders, which worked out brilliantly. In fact one of those boys ended up living with us for six months when things weren’t going well for him. My son was safe. And he did very well at school. He got into uni, and has done his Masters in Business and travelled the world and been to every Olympic Games since 2000. He is very good at making friends. He lives independently now.

When I was a kid I was sexually abused by my brother. And after my son’s accident other issues came up for me. I was pushed very hard by a social worker to confront my brother, so I wrote him a letter. He must have thought I was going to tell the rest of the family, so he went to my mother and sister and told them that I had made it all up. So at that point, when I was dealing with the accident, my whole family decided to have nothing more to do with me, or my children. And they’ve had nothing to do with me ever since. It’s very important that people speak out about sexual abuse. Perpetrators know they can get away with it if the secrecy and shame are maintained.

So, my own family did not support me. But in these situations, it’s often surprising who helps and who turns away. One of the Mums from the school, who I barely knew, turned up at the hospital every day for months, taking me for a coffee, or bringing a cake of soap. She was so thoughtful. Friends have often been so much more supportive than my birth family. But it goes without saying that I would walk over cut glass for my children. The most important thing in my life has been to raise my children to the best of my ability.

In my mind I was about to leave my marriage before the accident. But my ex-husband really stepped up after the accident, and we ended up staying together for another six or seven years. After we’d been separated for a while I went on a girls weekend away, and one of the women was a lesbian. Every time she walked into the room I got palpitations. I was feeling really bizarre. So I told her how I felt, and she thought it was hilarious. I was about fifty at the time. So that didn’t work out. She advised me to go to a female sex worker, so that I’d know. That wasn’t very helpful, because I can’t imagine having sex with somebody I don’t know. A while later I went to a women’s poetry group, and I met somebody there. It all felt pretty weird. But we were together for about three years.

I don’t like to wear the lesbian uniform. I dress differently quite intentionally. I like the hippie look, with free flowing dresses and bright colors.

I hate exercise. I’d rather read a good book. But I have come to like aqua aerobics. I was born with a talipes, a club foot, so as a kid I wore calipers. I couldn’t do sport.

I support equal marriage. It’s important to me. And I have worked for lots of women’s health organisations. I believe working with women to help them work out what they think, and to reach their potential in any way they see fit, changes families for generations. But probably I am more interested in the rights of children. I was on the board of the Foster Care Association. I support the rights of children to have a say in where they live. Kids are way smarter than adults give them credit for. One of the things that happens to children when they get moved from place to place is they loose all their stuff. Once, when I was at a conference for people who work in child protection, I suggested that everyone leave their handbag or wallet where they were sitting when they moved about the conference for each session. But everyone refused to do it. This is what we ask children to do all the time. We need to think what it’s like for kids. I always ask adults that I am working with to think about what life is like for their children. Adults are so busy being right, or wanting to prove a point, or holding on to a principle, that they don’t think about the impact on their children.

I tell people that they need to discuss issues with their children, but they often tell me their children don’t know about their problems. But when I ask a room full of addicts what age they were when they knew their parents had an addiction, the average age is three and a half. So, your child knows.

If you don’t tell them the truth, children make up what they believe to be true.

If I ask a child why their Dad left, for instance, they tell me it’s because their room was untidy, because they remember him telling them to tidy their room. Children need the right information to make sense of things and to make wise decisions.

I have fostered children for the last twenty-three years, and still do. I have had hundreds of foster children.  Sometimes just overnight. Sometimes for much longer periods. Mostly boys, because boys seem to end up in care more often. When boys are distressed they act out. When girls are distressed they sit in the corner quietly, and that doesn’t bother adults so much.

I was working at a hospital once, when the manager called me in to his office. He was drumming his fingers on his bible, and told me that my services were no longer required. It was obvious that it was to do with my sexuality. The message was extremely clear. I thought, oh well, that’s your loss.   Some of the staff were indignant, and wanted me to do something, but it is very hard to prove. I am fortunate in that I am never short of work.

I’m a travel nut, and luckily for me my partner, Marian, is too. My children just want me to be happy. They are totally accepting of my Marian.

I do love sex. I think a lot of people have this idea that as you get older you’re not interested in sex. But I like it more now than ever. Especially being straight when I was younger. It makes a huge difference to me now not worrying about getting pregnant and all the other stuff. Maybe I have fewer inhibitions. And I feel like I’m with the right person.

I would rather be dead than dependent. I believe in euthanasia. I’ve seen some undignified deaths. I don’t want that.

I’d urge everyone to enjoy each period of life. Try not to get too consumed with what’s ahead and what’s behind. I’ve enjoyed every job I’ve ever done, and had the chance to do many different jobs.

I can’t really see myself retiring. I’m very lucky in my line of work, I could just continue working for one or two days a week forever.