The most special thing about me is that I can sing.  Singing has been a part of me since I was a very little girl.

When I was seven years old, there was a talent school run by Miss Roderick, who by the way lived with her companion and wore very sensible shoes, tartan skirts and twin-sets. The talent school was in the local Presbyterian Hall, and we’d go and do dance and theatre and I loved it.  I just got the bug.  One day a talent scout from a TV show came to see us and invited me to sing on a television show, a Saturday morning show, run by Uncle Reggie.  You could never do that these days! The day that I went on Uncle Reggie and his sidekick were sitting in banana chairs watching on, and they told me I had to walk through these great doors.  I sang “A dream is a wish your heart makes” from Cinderella, and I went through those doors and I never came back.  That was my entry into the magical world of show business.  For me, singing is a very holistic thing to do.  There are people who take up singing who like to sing, then they need to get a job and a mortgage.  I sing because I can’t do anything else.  There’s nothing else that nurtures my spirit like singing. It’s something I have to do. I’ll be singing until the day I die.   When I was a teen I sat around for a year waiting for a job.  I used to hang around Kings Cross, go to clubs and pubs, the Whisky a Go Go, and ask for a job.  I’ve had a very long career as a singer.

In the 1980s I sang lots of jingles – David Jones, Sussan, Toyota, L.J.Hooker, P&O.  I don’t make any ongoing income from them, because we don’t have the same system of residual payments as they have in America.  If we did, I’d own this whole block of flats instead of renting this little one.  But they were fun, and now I sing a medley of them in my show and everyone laughs.

I was in Jesus Christ Superstar in 1973.  I’ve worked with lots of great people, the boys who went on to become Air Supply, INXS, Jimmy Barnes, Billy Thorpe, Powderfinger and Hugh Jackman.

From there I went on to being a bit of a gay house diva.  I sang at the opening of the Gay Games in Sydney in 2000, performed at loads of events for well known Sydney gay and community organisations like Mardi Gras, ACON, the AIDS Trust, Bobby Goldsmith Foundation and many more.

I’ve done lots of fundraising over the years for HIV/AIDS, and more recently for marriage equality.   If I lend myself to a charity, I do it because I believe in that cause. I may not be able to give donations to causes, but I am able to give my time as a performer.

As a singer, I’ve had many years of getting dressed for performing.  About fifteen years ago a friend said “You’re not doing any more shows without me doing your hair and make-up.” He taught me a lot.  Having my hair and make-up done helps me to stay level, because I get very nervous before a show.  Are people going to come? Are they going to like it? Will I remember the words?

Perhaps because I am a performer, my style is many layered, and borders on the fabulous.  I’m like a magpie, I always go for something shiny.  Disco-y.  Bling.  I’m totally girly.

Before I knew that I was gay, I used to go to see the rollerderby, and I used to find those girls strangely attractive, strangely frightening, and I didn’t know why I found them so alluring.  I didn’t have a real concept of gay, or camp, or lesbian.  It wasn’t in my realm.  My parents had several gay male friends, and one was very flamboyant, was endlessly bringing home Balinese male friends.  I always heard this word “camp”.

One of my fondest memories is of going to this man’s house at Bungan Beach and him serving these fabulous camp deserts.  Parfaits.  I remember asking my mother what camp meant.  She told me that he was at a party once, and someone put ice down his back and it hit a nerve, and turned him camp.  How would you come up with that story?  I just accepted it.

I didn’t come out until my late thirties.  I already had my daughter.  My sexuality has impacted my life in positive and negative ways. I spent the majority of my music career working in the heterosexual world.  When I came out I was one of the women who broke the glass ceiling for women in the rock business in this country.  I came into it at a time when there was still a lot of disrespect for women, and I had to be a very strong personality to survive, and that’s how I developed my reputation as being a tough bitch.  I had to be.

I’ve performed much more in the gay men’s community than the lesbian community.  I have lots and lots of lesbian fans, don’t get me wrong. But in Sydney the lesbian scene is quite young, and the community seems to embrace the younger, more guitar playing, or cabaret or burlesque, rather than somebody coming out and singing a great dance track.  I’ve been told that the songs I sing are too gay. Maybe it’s because I don’t look particularly gay, because I don’t look like the stereotype.  But I don’t think that I have to try to fit into a niche market, people’s expectations.  The gay boys like me because I sing the songs that are big in the gay clubs.  Perhaps I fit more into a camp sensibility.  It used to bother me.  I used to think, why can’t you embrace me as part of your culture?  But now I do what I do, and take a gig when I can, and do the best I can.  When I did the Lesbians in the House concert I was terrified that people would think I wasn’t lesbian enough.  But I was honored to be on the bill, and people cheered and got up and danced, and I had a great time.

My family embraces who I am.  Having my daughter is the most important thing I’ve ever done.  I created a family.  But I was mostly a single parent.  Now she’s a very important part of my life.  Her father, my ex partners are all part of this extended family.  My grandchildren love their gay grandmother, and their gay second grandmother, who was my partner through much of their lives.  We talk to them about things in kids vernacular – we tell them that saying something is gay, as a derogatory comment, is not good.  My sexuality changed over my daughter’s lifetime. I hope it impacted on her in a way that opened things up, that gave her new ideas of freedom.

I don’t party as much as I used to.  I don’t drink as much as I used to.  But I could still perform every night.  My voice is internal, and I am more aware of it as an instrument as I get older.  I don’t sound now like I did when I was thirty.  Some things are a bit more of a struggle, but I just adapt.  I’ve been a voice teacher, which allows me to keep learning and use techniques for myself.

As I’m getting older, it’s frustrating to me the way people judge my ability.  In our culture in Australia women performers have a use-by date. Younger is better. You’re seen as past your prime.  In other parts of the world the older you are the more revered you are.  I love the way, for instance, older Black American women singers are respected and their experience valued.  I wish that happened here.  Oh, and something else about getting older – I loathe the fact that I have to constantly dye my hair.

I’m a reactive person.  A Sagittarian.  Quite fiery.  I often open my mouth just to put the other foot in, as I’m taking one out.  I say what I think.  It’s the way that I am.  I’m aware of myself, I certainly admit to my shortcomings.  I can be personally very deep and spiritual, and then on the other hand I can be extremely flippant and direct. Meditation helps me. I try to live as honestly as I possibly can, and to be the best person I can be.

In relationships I’ve learned that if something is bothering you, you need to talk about it rather than bottle it up.  Maybe when I was younger I might have fought to keep a relationship going.

When I turned 50 there was a definite shift in my perception about life.  I now have more desire to please myself, and care less about what others think of me.  I know myself.  And as far as girlfriends go, I swear, if you can’t spell you don’t have a chance with me.

Sex is really important.  And it’s important to say what you like, and what you don’t like.  It’s all about communication, and trust and respect.  You have to be able to tell someone, no don’t do that, yes do that, please don’t strangle me!  But you never know what you’re into unless you try it.

Being an artist is a difficult passion to have.  Financially it’s a struggle.  There have been times when I just hang my head and wonder how I’m going to pay the rent.  The rug is always being pulled out from under your feet when you are in show business. Always.  You have to understand that it’s not everybody’s destiny is to be the next big thing.   There are times when I’ve earned good money, but it’s inconsistent, and because I haven’t had a sub-career, a day job, I don’t have any back-up, or a huge amount of money in super.  I don’t own any property. Sometimes I worry.  Am I going to be living in a tiny housing commission apartment when I’m 70?  But I think, well if I am I’ll make the most of it.  Because what are you going to do?  You can’t sit around feeling sorry for yourself, and you don’t know what’s around the next corner.  You just don’t know.  You could get some huge gig where you get paid a lot of money. I think that I’ve been really blessed because I’ve been able to make a living out of music.  To me that’s as successful as you can be.  Poverty is scary, but I don’t want to live my life focusing on what I don’t have.  There are millions of people who don’t even have a grain of rice.  So, I’m winning!

It’s all a bit of an adventure. Life is like an amusement park, and sometimes you’re going along on the rollercoaster, hands in the air screaming with glee, and at other times you’re holding on for dear life.  I’d like to keep singing, keep recording, having fun…and then die.

There’s only one other thing I’d like to say to everyone out there… I’m available for weddings, parties or anything! 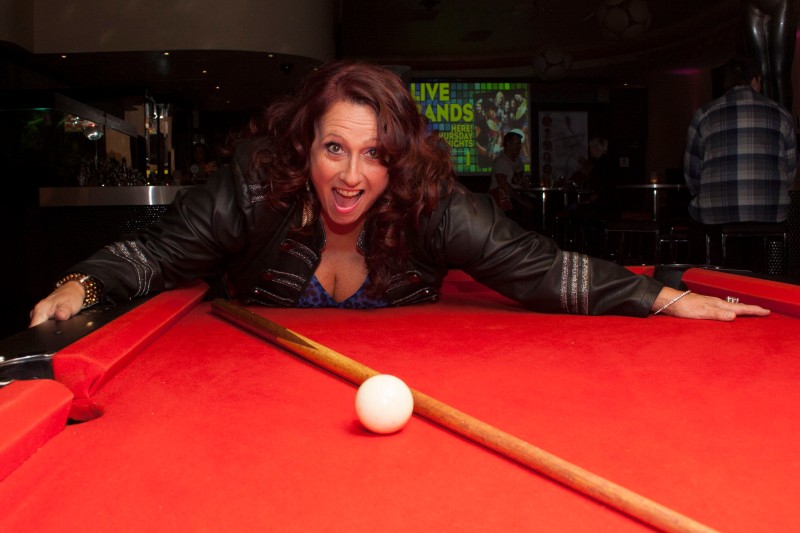