…I don’t see being gay as a lifestyle, it’s not just that I prefer women, it’s more than that because I am in a world, and in a culture where that is not the norm.  You can only deal with it by having a political framework… 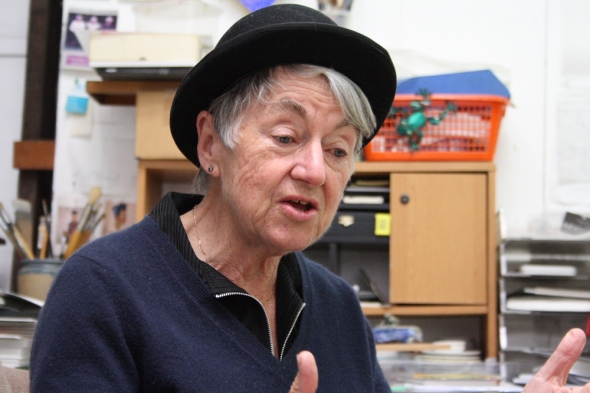 I think sex is wonderful.  Always was, hopefully always will be.  And you really shouldn’t neglect it…For me, it hasn’t changed as I’ve got older.

I talk about my age like a little kid. I’m 73 and three quarters.  I was born before the second world war.

I’ve always been out there.  I was very much loved as a child, and I’ve never been worried about what others think.  I’ve always liked men’s clothes, men’s lives, what men got.  I was determined to have all that but to remain a woman.  To always be a woman. My style is a sort of modified butch, modified to suit me.  If I ever put on a dress I feel like I’m in drag.

I’ve had several lives.  I’ve had a life as a mother and grandmother. A life as an academic.  An activist in the gay community.  An artist. 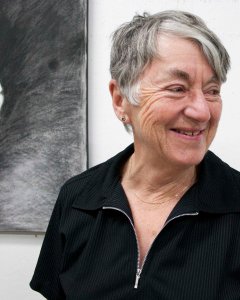 And in my later years I’ve been very interested in what you can do with an ageing body, in terms of physical and mental abilities.

You can’t deny you’re getting old.  Things fall off, and they wrinkle.  But it was something I thought about when I saw my mother in her seventies, extremely thin, and having smoked her leg off, build really good shoulder muscles by pushing her wheelchair around.  I thought, well if she can do that, why would you be happy with becoming a saggy, baggy old lady?  But, it annoys me that I can’t do five spin classes a week anymore! Just let me say, the euphoria you get from a spin class is better than what you can buy on the street.  I love the high you get from exercise.  It’s guilt free.  So, in my later years I have become a gym junkie.

Just before the Gay Games were coming to Sydney in 2002, my trainer said “You’ve got to have a goal.”  So I went into the Gay Games in bodybuilding, and I won gold.  Then I went to Chicago and won gold again.  It’s the silliest sport, but what appeals to me is that it’s got nothing to do with performance; it’s all about aesthetics.  It’s about how you look. If you’re a body builder you train and you train and you train.  Then you pose, in a bikini.  I don’t want to go to the next Gay Games in Cleveland, but if I’m still alive in six years time, I’ll merely be in my eighties, I’ll go to that one.

Mind you, it’s not hard to win a gold medal when you are the only contestant in the age category.  But all the other sixty year old women out there could have been in it, but they chose not to.  I chose to be a bodybuilder.

My sexuality has certainly enriched my life.  I had thirty years in the hetero world, and another thirty in the gay world.  If you are happy with yourself, you tend to put positive stuff around you and you tend to get positive stuff back and you get acknowledged for what you do.  But I do know that for some people, being gay can be a difficult, awful problem.  I would not like to have been gay sixty or seventy years ago, in Europe.  But perhaps wartime wouldn’t have been too bad for some of us, because all the girls were together, in uniform, driving big trucks and planes and trains!

I had a lovely, lovely husband, but we had a bit of a problem with alcohol.  There came a time when I simply couldn’t live with him anymore.  I’ve had lots of life-broadening and challenging experiences with partners, but I learned something important from every one of them.  The relationship I am in now, we have a lot in common, but not so much we bore each other.  She is such a lovely woman.  I’ve been lucky.  I think it would be really hard to be lonely in old age. 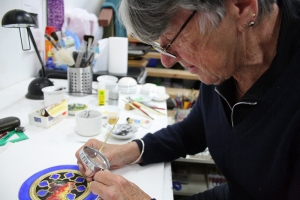 I am also lucky because I have my art.  Artists either burn themselves out,or they live forever, busy painting ’til the last moment.  We don’t have to look around for something to do to fill our lives.  It’s not like being an accountant.  And there comes a time when dentists must get a bit too shaky.  But you can keep doing art forever. 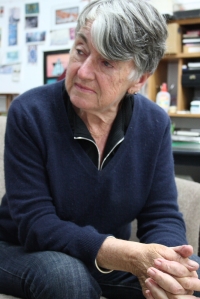 I’ve always drawn since I was a child.  I always loved beautiful things.  I went through a period when I made art with children crawling all over me.  And women and children are my concern in my art.  For me it’s a way of expressing politics that matter to me, not like a teacher or a preacher, but as something that is beautiful, and sometimes troublesome.

I wrote the very first book about Australian lesbian art, published in 1996. I got all the material together and I thought I was going to get a little paperback, but my publisher put it out as a coffee table book.  I couldn’t believe it.  A big book about dykes and art.  I was so happy with it.  I love teaching.  Students are always coming up with great ideas. My house is full of works my students have done, and given to me.

I’ve always been political.  I was very much aware of feminism being a challenge  for me when I was at home with four small children.  The destruction of the environment has always been important to me.  When I discovered I was gay, I slid into gay and lesbian politics really easily.  I don’t see being gay as a lifestyle, it’s not just that I prefer women, it’s more than that because I am in a world, and in a culture where that is not the norm.  You can only deal with it by having a political framework.  I was involved with the Gay and Lesbian Arts Association.  I had a stint as co-president of the Australian Center for Gay and Lesbian Research.  I have curated many exhibitions, taught elements of women’s studies courses.  Art is a wonderful way of accessing things that you feel, think, want and desire.  But it is people who change the world, not my art.

I am really lucky to have been recognised for my work.  In 2006 I got an Edna Ryan Award for my contribution to feminism and art.  In 2007 I received the Order of Australia Medal for service to the visual arts, contemporary Australian art, education and the community. 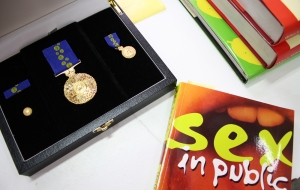 The Governor of New South Wales, Marie Bashir, gave me a particularlynice cuddle when she presented me with the medal.

I’ve marched in the annual Mardi Gras parade in so many different ways.  I once walked alone, spiffed up, wearing a tail suit and a bowler hat with the word dyke written around the top of it.  I’ve danced for the whole parade, which is so exciting because you know the moves, you’re synchronised with your fellow participants, and when you get to the end you feel as though you can just dance all the way to Wollongong.

I think sex is wonderful.  Always was, hopefully always will be.  And you really shouldn’t neglect it.  It’s lovely cuddling and kissing somebody youcan trust and love.  For me, it hasn’t changed as I’ve got older.  You have to look after yourself on all dimensions – mentally, physically, sexually, spiritually.

We lesbians really need to think seriously about a lesbian old people’s home, because old folks homes are grimly heterosexual in the worst way.  We need to think about our health more than we do, as a community, and the impact of our use of drugs and alcohol.  What do we want to leave behind?  There was a real shift for me when I had grandchildren, because I was suddenly much more aware of the future.  There are some frightening future scenarios for us all.  Children are our future, and we should take care of things for them.

I retired as an Emeritus Professor from University of New South Wales and I am a Conjoint Professor at Newcastle University.  I still supervise Masters and PhD students, give talks and do other odd jobs for them.  Oh, and I carry the mace in the Academic procession at graduations. I’m sohappy I don’t have to suffer all the meetings and paperwork, so semi-retirement is fine by me.

After working all my life except for five years having my children it was strange not going to work every day, and it took some time to find my rhythm, but retirement for artists is a golden time and hopefully it will shine for me for a long while yet.  I still have lots to do.  Everyday I turn on my computer and I find interesting work offers, like teaching short courses in schools, or judging a lesbian photography competition.

I don’t have any great plans for the future.  I just want to keep doing what I’m doing.  There’s nothing grand, because I don’t need it anymore.