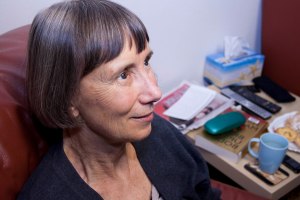 …I remember going to see Peter Pan, and being so impressed by a woman, dressed as a boy, who could fly around with her companion, Wendy.  I realised that a girl could live like that…

That’s how I came to be jailed by the Bjelke-Petersen government.  I got three weekends in jail – the men got five!  You can imagine how happy my parents were when I rang them from the Watch House. Dad refused to go bail.

I’m fifty-nine and a half years old – just six months till I hit sixty.

I took early retirement when I was fifty-five.  I hadn’t planned to retire.  I would have happily worked for another ten years, but gradually, having Multiple Sclerosis meant that I couldn’t do all the things that needed to be done in the job that I’d had for twenty years as Sales and Marketing Manager for Cambridge University Press.  My work meant that I flew around the country and the world like other people catch buses. It was a difficult year in 2007.  I was diagnosed with MS and my mother died, and I was so, so tired.

It takes a while to get into retirement, because if you’ve worked your whole life, forty or fifty hours a week, everything is set up for that lifestyle. Work fills up Monday to Friday, and often the weekends as well.  And then you wake up one morning, and think, what am I going to do? What’s the routine?  What happens to women who have had long professional careers when they retire?  I loved every minute of my working life – working for an academic publisher, in English language teaching, and before that I taught English in Paris for three years in the early eighties. It was a lot to suddenly give up. 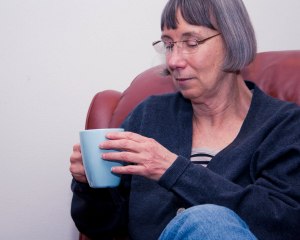 So much has changed in my lifetime.  When I started my working life it wasn’t the norm for women to work and to have lifelong professionalcareers.  My mother was an art and crafts lecturer – she had children, she stopped work. As a teenager, I could never have imagined that gay marriage would be a topic for discussion in mainstream society. And who would have thought that Australia would have so many women in public office – a woman Prime Minister, Attorney General, Governor General, State Premiers and Governors?

I like to look androgynous and I like to wear stripes.  It reminds me of Paris. When I was little I had long blonde curly hair and my mother used to make me beautiful dresses, but I always felt as if I was in drag.  At the age of six I talked my mother into going shopping and leaving me at the hairdressers.  Cut it all off, I said.  Are you sure? said the hairdresser.  Oh yes, we’ve talked about it, I replied.  When Mum came back it was the first time I’d ever seen her cry, looking at all my curls on the floor.  I knew at that age that I wasn’t going to be like my mother. I told my Granny then that when I grew up I wanted to live an independent life.  I remember going to see Peter Pan, and being so impressed by a woman, dressed as a boy, who could fly around with her companion, Wendy.  I realised that a girl could live like that.

I’ve always had a great sense of social justice.  As a little girl I joined the Brownies, and then the Girl Guides, because I liked the idea of helping others.  At one point I was the most highly decorated Girl Guide in Queensland – I had more badges than anybody.

At the age of fourteen I was living in Brisbane.  I knew there was something wrong with the Queensland government, and I couldn’t believe why adults couldn’t see it.

By the time I got to university I was involved in the Vietnam moratoriums, opposing US and Australian involvement in the Vietnam War.  I was in the first Women’s Liberation consciousness-raising group in Brisbane.  In 1971 we demonstrated against the Springbok rugby tour, as a sign of our opposition to the racist apartheid regime in South Africa. The Premier, Joh Bjelke-Petersen, proclaimed a state of emergency which basically suspended our civil liberties and gave the police extraordinary powers to move us on and bash us with their batons. In 1972, a group of us, men and women, walked into the Brisbane Stock Exchange and threw animal blood on the boards of what we saw as companies making profits out of war, as they still do.  That’s how I came to be jailed by the Bjelke-Petersen government.  I got three weekends in jail – the men got five!  You can imagine how happy my parents were when I rang them from the Watch House. Dad refused to go bail.  But it didn’t matter because the Queensland Trades and Labor Council came down and bailed us out. 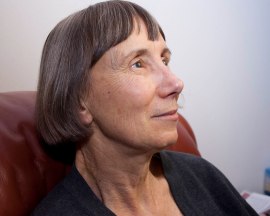 Of course, there was a lot of sex, drugs and rock’n’roll too.  But we saw ourselves as part of a worldwide social revolution that was going to change the world, and yes, I think the world did change.

I moved to Sydney when I was 20, and worked as a nurse while studying part-time. I have very loyal long-term friends from that time, and even earlier, and that’s important to me.  Lesbians are a minority of my friends.  Most of my friends are straight and my best friend, Bill, was a gay man.  It was Ti-Grace Atkinson who wrote that; “Feminism is the theory, lesbianism is the practice.”  For me, my sexuality is interwoven with all aspects of my life.  It’s part of my identity, along with feminist beliefs, progressive politics and activism.  I was once at an opening of Mardi Gras when a group of gay men heckled an Aboriginal person doing a Welcome to Country, and I was shocked.  Sexuality is not the major factor for me, because Liberal voting conservative gays and lesbians are the last people I would ever get along with.  For me, politics holds people together, and I still do what I can for local issues, for elections, and community action groups.

I worked at Elsie Women’s Refuge as a member of the first official collective.  It was scary.  We were a bunch of women in our early twenties and we had to deal with government departments and funding bodies.  We’d have government ministers, like the Commonwealth Government Treasurer, Bill Hayden, knocking on the door.  Within a few years there were fifty women’s refuges around Australia.  When Gough Whitlam became Australian Prime Minister, women’s refuges were right at the top of the list for government funding.  Whitlam also abolished university fees, which meant many young people from poor backgrounds, and lots of women, could go to uni.  That’s how I got my Arts degree.

I went to the first Sydney Gay Mardi Gras with two friends – one was a teacher and one was a probation officer and I was working as a nurse.  We all had to leave the march before it got to William Street, because if we’d been identified we would have lost our jobs.  The Sydney Morning Herald published the names of people who were arrested, and a number of them lost their jobs.

I first had MS in 1978, but I recovered after ten months.  I am so lucky that it went into remission because I went off and had this great life, with no symptoms until almost thirty years later.  For me, ageing is mixed up with having MS.  I’ve used mobility aids for the past couple of years, first a walking stick, then crutches around the house and now I zoom around on a scooter or use a wheelchair when I’m out.  People that I meet now see the disability first, I think.  My old friends all knew me as an able-bodied person with normal energy levels, and they are very supportive.  I go out often with friends, to the opera and the Sydney Symphony, to art galleries and the cinema, to cafes and restaurants, and to all my groups, and on the whole I’m amazed by how kind and helpful people are.  I don’t know if, when I was able-bodied, I would have been so helpful. In the supermarket, if I’m stretching for something on the shelf, someone always asks if they can help me.  People open doors, they stand aside, though maybe they are avoiding being run over by my wheels!

How did Jenni and I get together?  We’d been friends for a while, and we went out to dinner to an Indian restaurant.  For some reason I ordered not just the hottest dish on the menu, but I then told them to make it hot, hot, hot!  Soon our eyes were streaming and Jenni had to go up the road to buy a big box of tissues.  After the meal I said I had to go home, because I wanted to watch a program on television!  How romantic!  We’ve been together ever since.  But, it’s a question.  How do we date things?  We don’t know exactly when our anniversary is.  I notice when other people say “I’ve been married for twenty years,” they know exactly how long they’ve been married, they have all the photos.  It makes a huge difference.  Even so, I don’t know if we’d want to get married.

Jenni and I have lived together for over twenty-five years.  We can’t think of any discrimination we’ve faced – quite the opposite, we’ve always been made welcome as a couple.  But we have both always worked in gay-friendly organisations, with urbane sophisticated people, and lived in the inner city.  I’m very proud of being in a long-term relationship.  It’s not for the faint-hearted.  Each year Jenni and I grow and change, but we always manage to find common ground and happiness together.

My daily routine is so different to when I was going to work.  I have very slow peaceful mornings – it takes me a long time to get ready for the day.  I don’t make any appointments before lunchtime. I am really living like a bourgeois Parisian lady-who-lunches. Having this level of disability, I have to pace myself.  Write lists.  Take more time.  I’m lucky because I have an income and I have a loving partner.  There are things I can’t do, but I adapt.  I do yoga stretching and weights, talk to friends, read the paper, use the internet. Jenni and I walk the dog.  Quite frankly, if I only do one thing a day, I’m happy.

It’s a bit of a cliché, but having a disability has made me a better person. It has made me more tuned in to the human condition. I have more time for people. I’m more aware of suffering, and I really appreciate my partner and my friends and the lengths they go to ensure that I have a good time.  And I’ve learned that there is nothing to fear from retirement.