…the older I get the more serenity I find.  When I was a young feminist we called respected older women crones – that would suit me. As time passes I grow more comfortable with myself – age empowers me…

I saw the film of Calamity Jane when I was ten, and it just stuck with me.  I always wanted a cowgirl suit, not one with a skirt, the boy’s one with pants.  When I see that film now the lesbian sub-text is such fun – “A woman’s touch”.  I had a cowgirl party for my sixtieth birthday.

I am very happy to be sixty-five years old.  The only limits in getting older are physical.  The legs don’t walk as well.  I get tired. But the older I get the more serenity I find.  When I was a young feminist we called respected older women crones – that would suit me. As time passes I grow more comfortable with myself – age empowers me.

When I was eight years old I had a pair of jodhpurs that I never wanted to get out of.  And a little red cap that sat at the side of my head.  That’s where my style started, and probably that’s where it’s finished. I was very shy as a child, and ironically I got chosen to be the mannequin in the little country town where I grew up.  I have a photo of myself in a gingham dress with my red hair in a basin cut – all the other little girls had blond curls.  I don’t like dresses – I haven’t owned one for twenty years.  As I moved through feminism I didn’t want any of that femininity. But now I like the softness of scarves and hats – and I like a coloured shoe.

I saw the film of Calamity Jane when I was ten, and it just stuck with me.  I always wanted a cowgirl suit, not one with a skirt, the boy’s one with pants.  When I see that film now the lesbian sub-text is such fun – “A woman’s touch”.  I had a cowgirl party for my sixtieth birthday.

I didn’t know what lesbians were until I was at uni and I read about them in the uni magazine.  In my late twenties I went to London with my husband, and while we were away we were invited for dinner to a house full of lesbians.  I had a wonderful evening and I’ve never let go so much – it was so much fun.  I felt like I’d come home. A couple of days later we went to Brighton, and one of these women put her hand up to help me down on to the sand, and it was like a bolt of electricity!  It shocked me.  I spent the next while travelling around Europe thinking; “Am I a lesbian?  She was really nice.  I really liked her.”  I came back to Sydney and got involved in activism and met someone there and fell in love with her.  She wasn’t interested, which was sad.  It was twelve years after the electricity bolt that I finally came out, and while it was an obvious link with my feminism, I just couldn’t work out why I hadn’t done it before.  I was married – to a man – for twenty-one years. I was forty when I had my first relationship with a woman.

It’s a struggle for us women to own up to what we’re good at.  I am very compassionate and I’m deeply committed to equality.  I find inequality and injustice abhorrent anywhere in the world.  I can’t stand corporatism.  I believe in transparency and democratic processes.  These ways of thinking direct my life.

I’m content now partly because – though it sounds trite – I think I have made a difference.  My background is in social work.  I am passionate about doing what I can to prevent violence against women and children.  Fighting for gender equality and social justice for lesbians, gay men and transgender people.  My PhD was about violence between lesbians, which was a new field to explore back then. I was the co-director of the Australian Centre for Lesbian and Gay Research for eight years.  In the mid nineties I did some early research on lesbian and gay youth homelessness. I collaborated on extensive research about the work place experiences of lesbians, gay men and transgender people.  I have been involved with social work education in Australia and overseas, but I think I’ve reached my use-by date with that now.  Officially I ‘retire’ in March next year, but I have been on leave for twelve months and working with local communities.  It still excites me to see older disadvantaged people, or people living with a mental illness, come together to make a community garden, for instance.  I have also been doing some work with an NGO in East Timor.

My official title is Professor of Social Work and Social Justice – those particular words are very important to me.  It continues to amaze and dismay me that being a professor gives me status and opens doors.  I like it best when a student says; “You’re not like a prof.”  That means I am behaving true to my values.

Except for when I think it is unsafe, I don’t feel any qualms about being out anywhere.  It’s been so positive.  Right from the beginning I’ve felt like this.  I came out immediately to my kids, despite a white male heterosexual colleague saying; “those poor children, I wonder what will happen to them now?”

Friendship is very important to me.  After a couple of longer relationships, I spent five years without a partner and in those times good friends are critical.  I don’t want to loose them ever.  I’ve been with my current partner for four years, and I feel like I have found a soul mate – I can’t explain it any other way.  I met her when I was sixty-one.  After we’d been together a year, she organised a surprise outing for us.  We were waiting at home when I heard a great big roar, and round the corner comes a bright yellow motorbike with two seats on the back.  On we hopped and off we went to the Hunter Valley for the day.  The driver was wonderful.  He had no teeth and a big beard and he said; “I got a daughter like youse girls”.

I look after myself by walking, going to gym and keeping my mind active.  For the first time in my life I’m not so driven, not competitive, I don’t care about achieving highly any more.  I find being older peaceful.  I like having time, not having to rush. For me age can be a protective thing.  I feel quite safe walking the streets near my home at night.  The thing that irks me is when young men call me “love”.   I’m not their love.  Sometimes people say “You don’t look sixty-five.”  They think it’s a compliment.  It really doesn’t matter.

My children have always been positive about my sexuality.  They were 8, 11 and 14 when I came out.  The first Gay & Lesbian Mardi Gras I went in, one of my children brought all their friends to cheer me on.  Once my son asked me; “Do you mind if you don’t hold hands at the school fete?” That’s all. 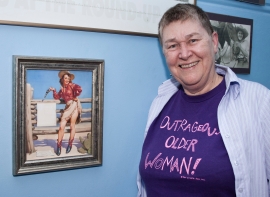 I have a wonderful nine year old grandson who recently asked my partner and I to Grandparent’s day at his school.  He introduced us to the teacher as; “My Grandma and her girlfriend.”

What’s next for me in my life?  I have lots of things I want to do. I like adventures.  I walked the Annapurna circuit through the Himalayas at sixty, just a few weeks after I had walked the Inca Trail, and I’d like to do more of that.  I want to learn photography.  I want to learn French because my grandson speaks French and he said he’d help me.  Creative writing.  I say that because I’ve published a lot of academic writing, and I can stop now and be free of that style and try writing creatively without a rigid structure and compulsory reasoning.  I’ve just bought a campervan and I love the idea that I can be like a tortoise, and pick up my house and head off.  There’s lots more to enjoy. 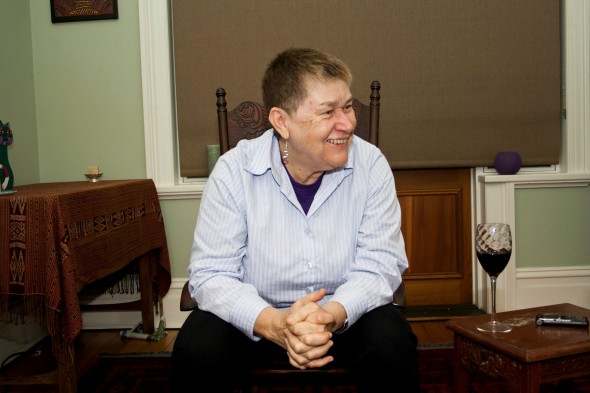